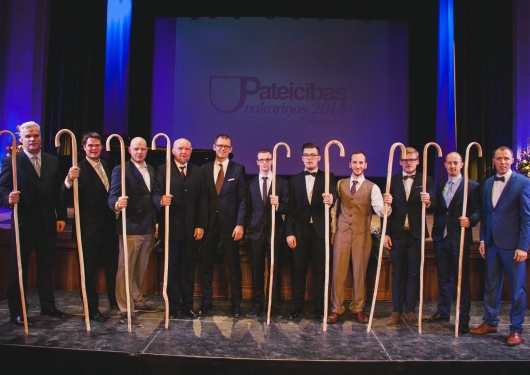 The most important end of the year event at Baltic Pastoral Institute remains Gratitude banquet and graduation. This year this event happened on December 2 in Ziemelblazma culture palace in Riga.

Gratitude for life long achievement was presented to pastor Aivars Skuburs. He has ministered in Jurmalciems, Smiltene, Narinciems and Talsi churches, has taught Christian studies at school, he has been LBCU council member and head of Sunday school union. Pastor Skuburs has been the deputy of Talsi city council and is still active society member and sports enthusiast. Kaspars Makevics, this year’s BPI graduate, thanked God for pastor Skuburs. Pastor Aivars Skuburs was the one who encouraged Kaspars to get involved in ministry and to go and study.

In his speech BPI director, bishop of LBCU Peteris Sprogis reminded of the power of faith in seemingly hopeless times. In 18th century after the Great Northern War two thirds of Latvian population had perished from sickness and plague. Many were weary and feeling hopeless. At that time Hernhute movement started in Vidzeme, educating common people and teaching them Christian values. Moved by this, Latvians later started Song festival tradition and cemented their sense of Latvian statehood. How hopeless ministry to people could seem in 18th century! Nevertheless, men turned up who responded to God’s call and invested their lives in the lives of others. What would Latvia be like today if they had not done that? Today in our ever changing circumstances we complain that people leave the country, that there are so few of us, we doubt if it is worthwhile to start ministry...Can we say that our situation is more hopeless than back in 18th century? As we start work or ministry, initially everything can seem hopeless.

But as we purposefully and relentlessly go forward, and as we obey God’s calling, what we do will bear fruit in due time.

Similar perseverance is necessary in beekeeping as P. Sprogis could testify. Similar example is found in the book of Nehemiah in the Old Testament: the nation of Israel had come from exile but the wall of Jerusalem was destroyed. And it was a good thing that there was a leader like Nehemiah who as they saw the need, let their heart be set on fire, heard God’s voice and obeyed it even if this job seems impossible.

P. Sprogis emphasized how important “take-off” point in love is in order to go towards a goal, to overcome obstacles and not fear challenges. For many BPI has been this “take-off” point. It has given opportunity to gain knowledge, skills and strengthen character while studying in Pastoral ministry program, Timothy school and Music leaders’ school as well as by participating in BPI DRAFT camps and church planting training M4. BPI graduate of 2012 Martins Asnevics (presently Limbazi church pastor), this year’s graduate Karlis Karklins (newly elected Riga Seminary church pastor), first year student Lukas Balodis from Valmiera church and pastor and his wife from new church plant in Ropazi Ilvars Ievins un Ketrina Ievina talked about their “take-off” points at BPI and future ministry plans.